by ErboristeriaComo | Aug 4, 2021 | Natural cosmetics for face body and hair 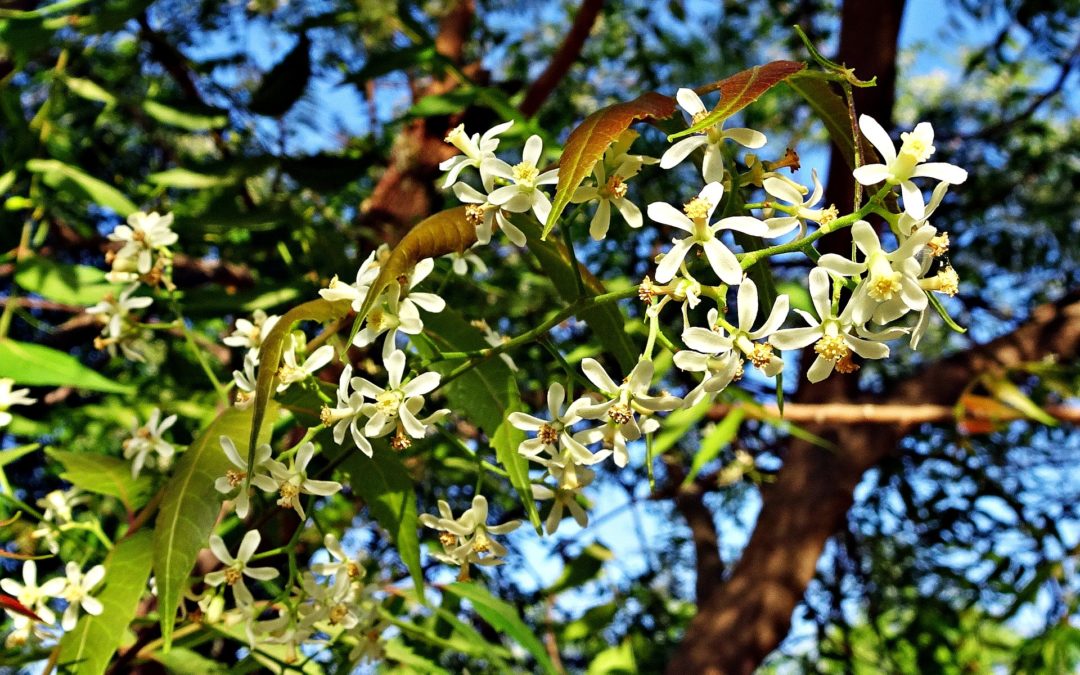 Neem, or Azadirachta Indica, is a plant used in India for about 4000 years and for two centuries at the center of international scientific interest, as a natural insecticide and more. Let’s find out why.

The Indian rural landscape is dotted with Neem (Azadirachta indica), subtropical evergreens up to 30 m tall with a circumference of 2.5m, which also grow in arid and barren areas, providing shade.

The name Azadirachta comes from the Persian name of the tree: Azad-darakhat-e-hind. Azadiracta Indica was named by Abu Mansour in 970 A.D. “the free tree of India”, as this plant seems to be inherently free from insects and diseases. The word “neem” derives from the Sanskrit “Nimba” which means “to give health” and this therefore gives the plant a great therapeutic value.

How to recognize Neem trees 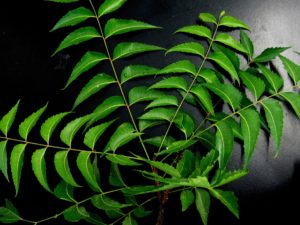 The leaves are compound, about 30-38 cm long and hanging, leaflets 8-19 in number and about 6-7 cm long crowded at the end of each branch. In particular, the young leaves are a pale soft green: their fresh green color and bright surface give the tree an attractive appearance. The new leaves appear in March-April before the old leaves have fallen.

Neem tree produce small, honey-smelling white flowers that attract bees. It blooms from March to May and is in full bloom in the summer when most of the other trees are bare.

The fruits ripen from June to August and are greenish-yellow, similar to olives, from whose seeds we obtain a pure cold-pressed oil very common in traditional medicine and local customs: neem oil.

A neem tree normally begins to bear fruit after 4-5 years, becomes fully productive in 10 years, and since then, 30-40 kg of fruit per year can be harvested.

Neem benefits and most common uses in India

It is used above all in the form of powder or oil. In India, neem has been known and used for over 4000 years and is an important ingredient in Ayurvedic preparations.

Neem seeds, barks and leaves contain compounds with proven usefulness as: antiseptics, antivirals, antipyretics, anti-inflammatories and antifungals. The medicinal utilities have been described especially for neem leaves (“Medicinal properties of neem leaves: a review“, R Subapriya, S Nagini). In Ayurvedic medicine it is mainly used orally, but its millennial use is also for the treatment of some very common external problems:

Over the past two centuries, neem has become the focus of the scientific community. According to a report by the Board of Science and Technology for International Development, this plant can represent a new solution in pest control, provide millions of people with inexpensive medicine, and even reduce the erosion, deforestation and excessive temperature of an overheated globe. (National Research Council. 1992. Neem: A Tree for Solving Global Problems. Washington, DC: The National Academies Press. Https://doi.org/10.17226/1924).

Neem benefits: how it acts as natural insecticide

Modern analyzes show that neem extract contains a wide variety of antibacterial substances and many of the claimed effects are plausible. But neem is unsurpassed, with lots of evidence, in modifying the behavior of insects. Azadirachtin in particular, its most studied active ingredient, is actually a nutritional deterrent, repellent, toxic and inhibitor of the growth of insects, being a reason for alterations in metamorphosis, interfering with the mechanism of action and synthesis of ecdysteroids.

When an insect sees a tree, it immediately thinks “food”. Unable to hide or run away, the trees have developed numerous defenses to keep from being devoured and the neem has spared no expense. Its leaves, bark and especially its oil contain a wide range of repellents and steroid-like chemicals, capable of profoundly modifying the life cycles of insects which, therefore, stay away from them. Suitably absent from neem flowers and nectar, these substances do not affect bees or other beneficial pollinators. In particular, thanks for its action, neem extract is useful:

Those neem leaf wreaths applied as a popular tradition on the doorstep of houses in India really have a protective effect on the inhabitants.

Neem natural insecticide: why it’s the best against other pesticides

It is neem, extracted from the Asian plant Azadirachta, the new frontier of natural pesticides that can help in the fight against parasites that show increasing resistance to traditional insecticides, thus representing a threat to agricultural production and public health.

This is demonstrated by the study by the University of Pisa, conducted in 2017 by a research group led by Angelo Canale from the Department of Agricultural, Food and Agro-environmental Sciences of the University. “Neem-based products – explains Canale – as well as other plant extracts, have shown efficacy against more than 100 species of harmful arthropods, with multiple mechanisms of insecticidal action that make the onset of resistance in the treated species unlikely. They are also low cost and have characteristics of reduced toxicity towards mammals ”.

Neem is successfully planted in cotton fields in India and vegetable fields in West Africa. Unlike synthetic insecticides, neem extract:

Neem natural insecticide but not very widespread: why?

Given that the insecticide obtained from neem is effective, safe and cheap, sustainable and biodegradable (and obtaining it would have a positive effect because it would require a cultivation of trees useful for the environment), one wonders why it is not more widespread in the world.

Probably, Neem has a long tradition of use and so It makes difficult for commercial companies to patent products derived from it to protect them from competition.

It follows that the same companies are not incentivized to spend on the approval of neem oil products, or on their distribution and advertising, when they can sell patentable synthetic chemicals more profitably, even if these, in some cases, turn out to be less effective or more harmful. The free market doesn’t always do the right thing.

Neem oil and Neem powder: here’s which one we recommend

If you are looking for pure neem oil, on erboristeriacomo.it we have selected for you the pure and multi-certified neem oil, the purifying hair scrub Phitofilos with neem and the pure neem powder vegan ok by Phitofilos. The neem powder, which does not have the pungent smell of oil, can be used also against lice for children.

A curiosity: at temperatures below 20°C the neem oil tends to solidify and must be dissolved in a water bath to be able to use it.