Reishi mushroom: all the properties 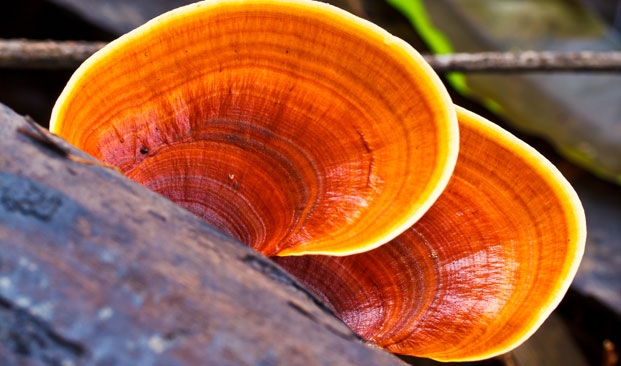 Reishi mushroom is an oriental fungus that is getting more and more visibility. Ganoderma Lucidum properties would seem to demonstrate, including those of reinforcing the immune system and for years on its account numerous scientific studies have been published about it.

Reishi mushroom: what is it?

Ganoderma lucidum is the best known fungus in mycotherapy and probably also the one with the highest number of studies and is generally known by the Japanese name of “Reishi“, while the Chinese name is Ling Zhi or Ling chi. This basidiomycete has an almost ovoidal shape and flat hat, its surface is wavy and irregular, yet it is smooth and very shiny. Visually, the entire surface of the Ganoderma lucidum hat is divided into multiple growth rings. The stem is lateral, of the same color as the hat. The meat is woody, very leathery, of a white-ocher color. Saprophytes of hardwoods or hardwoods, especially oak, grows from spring to autumn.

Why Reishi is it so appreciated?

It is appreciated for its therapeutic properties in eastern countries, especially in China, Malaysia, Japan, where it is intensively cultivated, dried and processed into medicinal preparations (powder, decoctions, ointments, tablets, etc.). The Latin word lucidus means “shiny” or “bright” and refers to the painted appearance of the mushroom surface.
Lingzhi has been recognized as a medicinal mushroom for over 2000 years and its powerful effects have been documented in ancient scriptures (Wasser 2005). In the Supplement to the classic of Materia Medica (502-536 AD) and the Ben Cao Gang Mu of Li Shin-Zhen, which is considered the first pharmacopoeia in China (1590 AD, Ming dynasty), the fungus was attributed toning properties, the increase of vital energy, strengthening of cardiac function, memory increase and antiaging effects.
Mycotherapy uses the hat and the stem of the fungus. It is used primarily as an immunomodulator.

What does Ganoderma contain?

The active constituents include:

What are Reishi mushroom benefits?

Reishi extracts are able to:

Reishi assumption: are there Drugs interaction?

Regarding herbal-drug interactions, studies have documented interactions with: anticoagulants (Reishi may have inhibitory effect on platelet aggregation, Immunosuppressants (Reishi can improve immune responses), chemotherapeutic drugs (it should be borne in mind that Reishi can greatly increase the antioxidant capacity of the plasma).

In conclusion, Ganoderma lucidum is a well-known Asian fungus with a wide range of applications. With its growing popularity, numerous studies are underway on the composition, cultivation and reputational effects of Ganoderma, and there are data that support its positive health benefits, including anticancer effects; blood glucose regulation; antioxidant, antibacterial and antiviral effects; and protection against the liver and gastric lesions.