Escholzia californica mother tincture against tension and insomnia. Here’s everything you need to know about this precious plant, one of the most common natural remedies for sleep.

Californian Poppy, scientific name Escholzia californica, is a herbaceous plant that belongs to the Papaveraceae family: it is a small poppy about 30 cm tall that blooms in May-July also used as an ornamental plant in gardens due to the beautiful yellow-orange of its petals; native to California, it grows in arid and sandy areas. Its name derives from that of the Russian naturalist Eschscholtz who in 1820 first classified it. 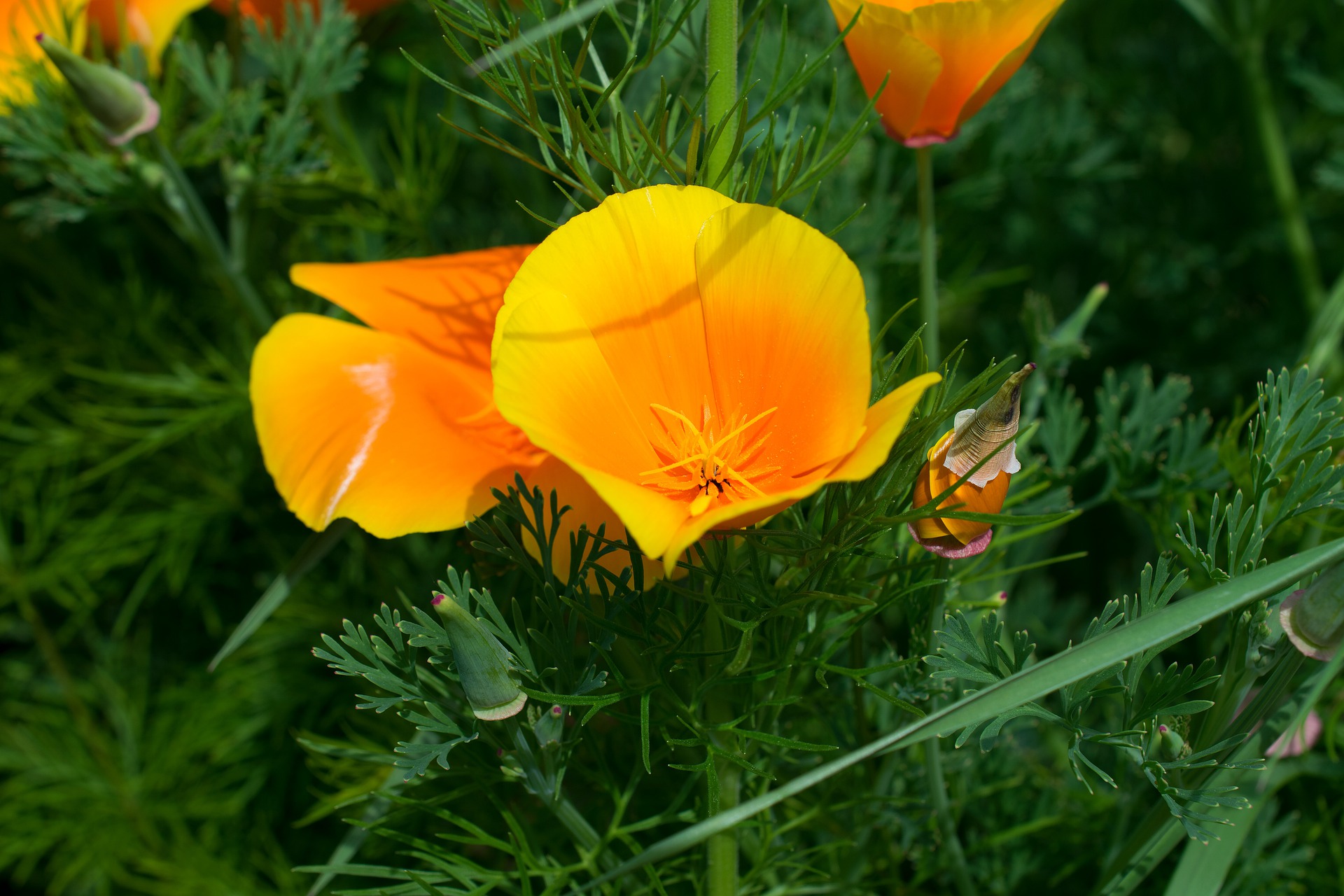 The American Indians used its leaves as a legume, boiled or cooked on hot stones. As a medicine it was used in intestinal colic, biliary, toothache, and also to reduce lactation and externally in poultices in ulcerations.

Both the flowering tops and the roots of the Californian Poppy are used.

The flowering tops contain many flavonoids, responsible for the color of the flowers, including a derivative of quercetin and isoramnetina.

As in all papaveraceae, Californian Poppy also contains a myriad of alkaloids, mainly contained in the roots, of which the most represented are those of the protopin group, which have shown spasmolytic, sedative, anxiolytic activity in in vivo and in vitro studies. Furthermore, protopin also shows choleretic and amphocoleretic action, ie able to modulate biliary secretion. This is why escolzia finds excellent application in painful syndromes of the digestive system thanks to a specific myotropic spasmolytic action at the level of the gastro-enteric smooth muscles and in particular of the biliary tract.

The most common preparations of Eschscholtzia are: infusion, dry or soft extract, mother tincture. The parts used: the aerial part and the roots.

Escholtzia californica mother tincture: what it is, how to prepare it

The mother tincture of Californian Poppy is prepared from the whole fresh plant with a title of 45° or 65°.

How do you prepare the Californian Poppy mother tincture? as explained by Bettiol, starting for example from 1 kg of whole flowering plant escolzia in a fresh state, containing on average 75% of water, about 2.5 kg of mother tincture will be obtained which must have an alcohol content of 65% v/v, adding 1.703 kg of pure alcohol v/v and 0.142 kg of water.

For a stable mother tincture it is advisable to add only the alcohol first and then the water after a few days, letting it macerate for 21 days and taking care to stir frequently. The containers used must be made of glass or stainless steel and absolutely clean, the alcohol must be pure, the water distilled in glass equipment.

Escholtzia californica mother tincture: what is it for?

The plant is used for sedative and mildly hypnotic and analgesic activity. It has been experimentally shown that the tincture prolongs the duration of sleep induced in the guinea pig and reduces its motor activity, thus showing a clear sedative and spasmolytic action (Vincieri, 1988). Recent studies have confirmed the sedative and anxiolytic activity, thus also playing an important role in the treatment of minor sleep disturbances.

As regards its activity on sleep, we can define it as a good inducer with shielding activity against negative stimuli deriving from the stress of everyday life: the plant is specific in case of difficult falling asleep as it decreases the time of falling asleep and favors a net improvement of quality of sleep (not repression of REM sleep) which becomes restful and calming. On the other hand, it is ineffective in insomnia that occurs during a serious mental illness and in insomnia that appears in the middle of the night or in the morning. Limits nocturnal awakenings, nightmares, and manifests analgesic action (migraine, colic and biliary spasms, etc.).

When preparations containing all the phytocomplex are used, the effect of Eschscholtzia is light, certainly more of a general balancer than narcotic, it does not present secondary effects or depression or addiction phenomena. For this reason it is often mixed in preparations with a sedative/relaxing action, especially in association with valerian, hops, passionflower, lemon balm.

Eschscholtzia proves to have a prolonged action that does not however cause CNS depression and is able to maintain mental acuity, it is also used in pediatric age in childhood neurovegetative disorders and in nocturnal enuresis. Use as a sedative in whooping cough is also reported.

It is recommended to take 50 drops of Eschscholtzia mother tincture in the evening before bedtime; 30 drops in the morning for anxiolytic action.

It is necessary to pay attention, being a sedative plant, to the simultaneous intake of drugs with sedative-hypnotic and antidepressant activity in order to avoid an unsolicited enhancement of the sedative action. As a precaution, use during pregnancy and breastfeeding is not recommended. Prolonged use is not recommended.