Aromatherapy: everything you need to know about it

While aromatherapy is commonly used to help people relax and reduce stress, there’s much more to it than that. Check out everything you need to know about aromatherapy below.

Aromatherapy is a therapeutic practice that uses the medicinal properties of essential oils.

What are essential oils? they are complex mixtures of organic substances, mostly volatile, with a relative density lower than that of water, of various chemical constitution, not very soluble in water and soluble in organic solvents, contained in different plants where they are located in particular tissues. They are usually obtained by steam distillation, solvent extraction or by suitable mechanical procedures. They evaporate slowly if left in an open container and leave no traces on the absorbent paper on which some drops have been applied.

Aromatherapy: what is it?

In short, we can say that essential oils can be used as an olfactory stimulus, in inhalation, in skin application, in application on the mucous membranes and by ingestion (a medical opinion is recommended). Each of these methods has its specificities, its advantages but also its risks. For Valussi, since the effectiveness of olfactory use depends only on the perception of odor, this application is the safest even with children or the elderly. In the dosages useful for sensing the smell, in fact, even the most aggressive or toxic essential oils are safe, if we think that to perfume a room, 3-5 drops of essential oils can suffice in a water container of the radiator, or in a vaporizer, diffuser, mini diffuser or even 1 drop on a handkerchief.

Recent research confirms the action of essential oils at the level of the nervous system, since they effectively and beneficially influence mental functions, mood and emotions. When we smell an essential oil, the “perfumed” molecules come into contact with the olfactory mucosa, where 10 to 25 million olfactory cells reside. The latter are actually nerve cells that transform the olfactory signal into an electrical impulse directed towards the hypothalamus, with the involvement of the amygdala, a nervous structure considered to be the seat of emotions, memories and moods, in relation to olfactory stimuli. (read more)

Essential oils also have antibacterial functions, toning and calming effects, decongestants and rebalancing. Very common is the topical use of essential oils, for example in the form of massages, in which the massage oil is added with essential oils both for purely olfactory effects and for direct effects on the skin or for penetration. Other possibilities of local application are creams, ointments, gels, hydrolates, clays and other topical preparations used to treat more specific or localized problems, such as infections or inflammations of the skin, infestations and itching, muscle or joint pains. The most important point to remember for applications on the skin is dilution. To generalize we can say that essential oils should never be used undiluted on the skin and mucous membranes. If you want to know how to use essential oils correctly read here. For some tips to use them, here.

The use of essential oils for therapeutic purposes, or aromatherapy as we understand it today, has a relatively short history. The term aromatherapy is a contemporary term, created in the 1920s by the French chemist Gatefossé, and was limited to the anti-infectious-antibacterial use of essential oils, locally for war wounds and systemically for more generalized infections. The use of essential oils in the massage and the “psychological” approach that often characterizes it are a development of the Seventies, particularly in vogue in Anglo-Saxon countries and exported to the rest of Europe in the last few years, so aromatherapy is always intended, in England, as a massage therapy, while in France it is intended as a branch of herbal medicine.

If the history of aromatherapy is relatively short, the history of the use of aromatic plants is instead very ancient but it is equally important to make some distinctions: essential oils represent a limited portion of the chemical profile of an aromatic plant, and that, on the contrary of how often it is disclosed, they do not represent the essence of the plant. Although balsams, resins and aromatic plants have been used for embalming, for religious ceremonies or sacrifices, there are no written documents that offer clear evidence of the preparation of essential oils.

It seems to have been Avicenna (in the 11th century) who discovered the steam distillation of aromatic plants, and thus produced the first essential oils and the first aromatic waters (hydrolates), and that the Arabs were responsible for exporting this technique to Europe. But doubts still remain about the authorship of the method, especially after the discovery of a pottery still dated around the second millennium BC capable of distilling essential oils from aromatic plants in the archaeological site of Pyrgos, on the island of Cyprus. 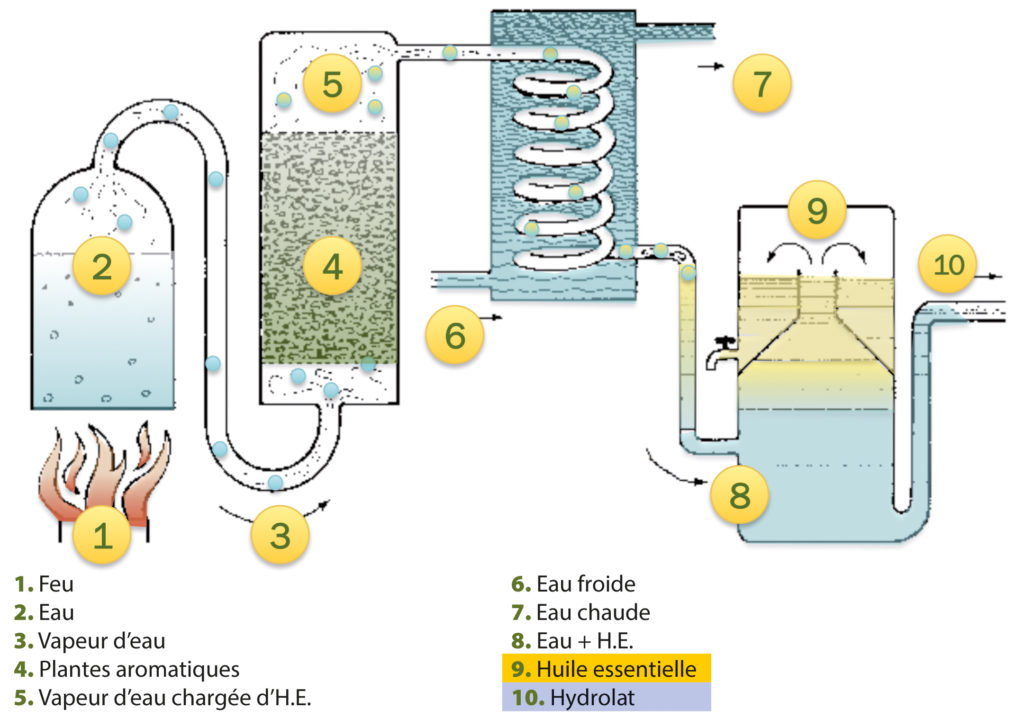 The first accurate description of the distillation process was made between 1200 and 1300 by Arnaldo di Villanova for turpentine and rosemary, and by Ramon Lull for sage, but they first macerated the plants in “aqua vitae”, or made them ferment in water. The presence of alcohol meant that they did not separate essential oils, but distilled aromatic waters (hydrolates).
We must therefore wait until 1563 to read the first text that specifies exactly the differences between fat oils, essential oils and the methods to separate the latter from the distilled aromatic waters: the Liber de distillatione of Giovanni Battista della Porta. It was only with the Renaissance that essential oils were distilled in sufficient quantities to receive specific attention from medical authors.

The systematic study of essential oils begins with JB Dumas and his treatise on essential oils (1833), while in 1866 the term Terpene appears for the first time, coined by Kekulè, whose work is carried out by Tilden and Wallach, who are considered the fathers of terpene chemistry.

At the beginning of the 20th century the interest in aromatic plants and natural essences from a therapeutic point of view was revived by the French chemist and scholar Rene-Maurice Gatefossé: he experimented with essential oils during the First World War, using essential oils like lavender, thyme, chamomile, lemon and cloves at the military hospital for their antiseptic and vulnerary properties. Later he coined the term “Aromatherapy” by writing that “French cosmetic chemists think that natural complexes should be used as complete constructive units […] without being fragmented. Dermatological therapy would then evolve into “Aromatherapy.” He wrote several books, including the famous Aromatherapy (1928), explaining the various properties of essential oils and their possible applications, with examples of their antiseptic, bactericidal, antiviral and anti-inflammatory properties. later he spoke of highly successful therapies for skin cancer, facial ulcers, gangrene and osteomalacia.

Italian researchers Gatti and Caiola studied the medicinal, psychological and cosmetic benefits of essential oils in the 1920s and 1930s. Paolo Rovesti was the first to demonstrate the value of certain essences for problems such as anxiety and depression. Dr. Jean Valnet, as Gatefosse, used essential oils to treat war wounds in World War II. He was both a doctor and a phytotherapist and used essential oils for many different conditions. He published his book on aromatherapy in 1964.

Jean Valnet also developed a theory to explain the mechanisms of action of essential oils: “According to the bioelectronic theory, in general, natural essences have an acid pH and above all a very high resistivity. Now, alkalinity favors the microbial proliferation while acidity hinders it.The bactericidal properties of natural essences are then explained. The high resistivity of the essences also hinders the spread of infection and toxins “.

The subsequent history of studies on essential oils becomes much more complex and rich in authors, with the growth of the importance of aromatherapy from a commercial as well as a therapeutic point of view.

Whether we like it or not, the practice of aromatherapy in the contemporary world is part of the great scenario of alternative and / or complementary medicines, at least in the collective imagination. For some, aromatherapy is just one of the tools of the phytotherapist, or indeed
of the doctor, for others it is a more independent mode of treatment, for others still a mystical approach to the health of the spirit.

However, 100% pure essential oils are increasingly proving to be essential hinges for a therapeutic approach to common everyday problems, both human and veterinary. In this sense it is fundamental to approach Aromatherapy with a new scientific method, making use of the most modern instruments for identifying the known phytocomplex and the chemotype, for a global assessment of the specific essential oil characteristics and a correct and rational use in the field health aspects. Not only therefore “essential oils such as food and cosmetic aromas” but supplements to the most common needs, in support of a medicine that is no longer alternative but integrated, and increasingly cares for the elderly.