by ErboristeriaComo | Jan 12, 2022 | Natural remedies and our useful tips 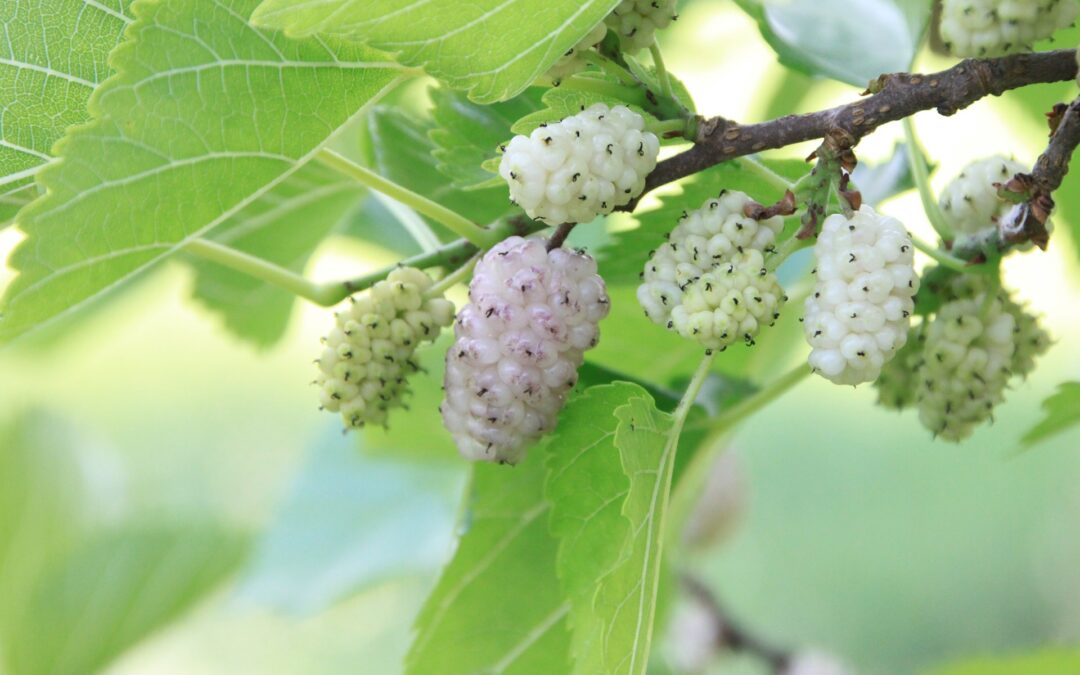 The white mulberry is not only known for the cultivation of the silkworm: here are its incredible properties in herbal medicine and its benefits on blood sugar.

The mulberry is a tree of about fifteen meters that can live at least 400 years. However, its height is limited by the cutting and removal of the leaves, which involves an already very slow growth. There are two widespread and closely related species of mulberry: the black mulberry and the white mulberry. Both belong to the genus of the Morus family of Moraceae and have been known since ancient times. 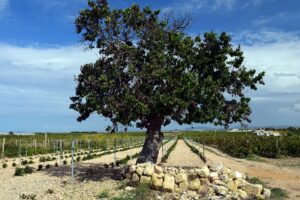 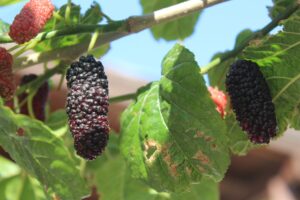 Black mulberry (morus nigra) has rough, heart-shaped leaves. It comes from a limited area in the south of the Caucasus, the Caspian Sea, Armenia and northern Iran. Its name is due to the fact that it is so called because its leaves and fruits are much darker than the white mulberry. It was cultivated even before the white mulberry, for its fruits and also mentioned by Ovid in the Metamorphoses. According to Plinio and Dioscorides, the juice of the unripe fruits, astringent and rather acidulous, stopped diarrhea, fought intestinal parasites, and also excessive menstruation. With its fruits, which are harvested in August-September, in the Middle Ages a kind of wine was made. 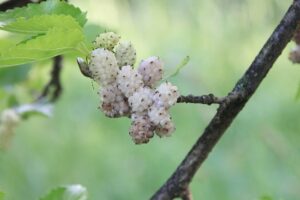 White mulberry (Morus alba L.) is a tree native to eastern China, with smooth deciduous leaves. Its leaves, twigs, roots (bark) and fruits are widely used in traditional Chinese medicine. In August-September the fleshy fruits ripen, which resemble the blackberries of the brambles, but are white-pink and tasteless and sweetish. The leaves, on the other hand, are the food par excellence of silkworms. In recent years, the white mulberry has had a growing interest in herbal medicine for its beneficial properties on blood sugar.

Properties of white mulberry and actives

Morus alba leaves are rich in carbohydrates and proteins, as well as many vitamins and minerals such as beta-carotene, iron, calcium and zinc; they also possess various polyhydroxyl alkaloids, stilbenoids (such as resveratrol and oxyresveratrol), flavonoids (including quercetin and kaempferol) and anthocyanins. In particular, the polyhydroxylated alkaloids found in Morus alba belong to the chemical class of imino sugars or azazucers and are one of the characteristic identifying compounds of the species.

Properties of the white mulberry

The phytocomplex of mulberry leaves has in particular an interesting hypoglycemic activity:

White mulberry leaves: the most important active ingredient for titration

The identifying compound of Morus Alba is the imino sugar piperidine 1-deoxyyrimycin (DNJ), an analog of D-glucose with a nitrogen group replacing oxygen on the pyranose ring. This principle was first isolated from Yoshikaki et al mulberry trees in 1976. Due to their structural similarity to carbohydrate monosaccharides, imino sugars such as DNJ are able to competitively inhibit carbohydrate digesting enzymes such as α-glycosidase and amylase (1). In particular, 1-deoxinojirimycin (DNJ):

Diabetes mellitus is now a common disease in many countries due to changes in lifestyle and eating habits. In China, nearly half of all newly diagnosed diabetes patients show only increases in postprandial blood glucose. A survey of global dietary structures conducted by the UN for food and agriculture in 2013 reported that the proportion of carbohydrates in the Chinese diet ranged from 60% to 70%, while the carbohydrate intake in the American diet was from 20% to 30%. A study in China found that the diets of type 2 diabetes patients were primarily based on carbohydrates. The comparison of blood glucose levels between the Chinese and Western populations determined that the consumption of glucose or 5 different types of rice resulted in higher postprandial blood sugar levels in Chinese than in Europeans.

Already in 2016 a meta-analysis was published “A meta-analysis of efficacy of Morus alba Linn. To improve blood glucose and lipid profile” with the aim of evaluating the efficacy of products derived from Morus alba on glucose and lipid levels. in the blood. The purpose of the exploratory study “Mulberry leaf extract reduces the glycemic indexes of four common dietary carbohydrates” was to investigate the effects of the white mulberry leaf extract on the glycemic indices of common food carbohydrates (glucose, sucrose, maltose and maltodextrin) .

Detection of the glycemic index

The glycemic index is a number associated with the carbohydrates in a particular type of food that indicates the effect of these carbohydrates on a person’s blood glucose level 2 hours after eating the food. A glycemic index (GI) of 100 represents the standard value, that for an equivalent amount of pure glucose. High GI, moderate, and low GI foods are believed to have GI values> 70, 55 to 70, and <55, respectively. Low-GI foods produce smaller fluctuations in blood glucose and insulin levels than high-GI foods. Current diabetes management guidelines recommend improving glycemic control by consuming a diet with a lower glycemic index.

Carbohydrates in food are absorbed into the bloodstream in the form of monosaccharides. The conformations of the glycosidic bond are the main factors that determine the shapes of the disaccharide, oligosaccharide and polysaccharide molecules. Glucosidase enzymes, found in nearly all organisms, hydrolyze the glycosidic bonds of sugar-containing compounds to form monosaccharides, oligosaccharides, or glycoconjugates. Glucosidase enzymes in the small intestine digest complex carbohydrates into monosaccharide constituents such as glucose and fructose, which can then be absorbed. Substances that inhibit the catabolic function of glucosidase can slow the breakdown of carbohydrates in the small intestine, thereby delaying the rate of glucose absorption and reducing the glycemic index of ingested food.

DNJ is an azo-sugar alkaloid that acts as a competitive inhibitor of α-glucosidase in the small intestine. This active can competitively inhibit the binding of the carbohydrate substrate to the α-glucosidase enzyme with an affinity similar to acarbose (but does not give the side effects of acarbose), slowing the breakdown and absorption of carbohydrates ingested in the small intestine and thereby suppressing postprandial increases in blood glucose and insulin secretion. It should also be emphasized that prolonged oral administration of DNJ does not cause hypoglycemia.

Conclusions of the study

In this study, comparing average blood glucose levels at various time points after oral ingestion of the reference or test foods revealed that white mulberry leaf extract had only a small effect on glucose uptake. from the gastrointestinal tract, as expected as glucose is absorbed directly without the need for α-glucosidase. The inhibitory effect of the extract on the postprandial rise in blood glucose after ingestion of sucrose, maltose or maltodextrin occurred mainly during the 15 to 60 minute period after the meal. Furthermore, compared to the known values ​​for each carbohydrate alone, mulberry extract, with DNJ, reduced the glycemic index of maltose, sucrose and maltodextrin by approximately 53%, 34% and 31%, respectively. These data show that DNJ delays the absorption of all 3 of these carbohydrates.

White mulberry: benefits on hyperglycemia, obesity and diabetes at the right doses

First, healthy adults recruited into the dose determination study were randomly assigned to ingest a sucrose solution concomitantly with mulberry leaf powder at weights equivalent to 0 (control), 6, 12, and 18 mg of DNJ. Postmeal glucose and undesirable effects were evaluated. Second, obese people with borderline diabetes were randomly assigned to the mulberry leaf treatment group (12 mg of mulberry DNJ three times a day) and to the control group in the 12-week prospective study.

Still on the subject of obesity: Current trends in the development of obesity drugs suggest the possibility of reducing weight and reversing the metabolic disorders of obesity by controlling appetite. In the study “Morus alba, a Medicinal Plant for Appetite Suppression and Weight Loss” more than 8000 plants were examined for cannabinoid receptor antagonists (CB1) and Morus alba was identified as the main medicinal plant.

By taking our supplement against high blood sugar, based on white mulberry titrated in DNJ and liposomal berberis aristata (with hypoglycemic action) (3), after meals for 12 weeks you can improve: