Vitamin d3 benefits and uses: why it is so important

Numerous scientific studies show that vitamin D deficiency represents not only an important factor conditioning skeletal health, but also a possible contributing factor in the pathogenesis of numerous chronic diseases. Find out what it is, where it is, symptoms and consequences of vitamin D3 deficiency and what we recommend as vitamin D for your bones and immunitary system.

The degenerative pathologies of the skeletal system can be very synthetically traced, at least from the point of view of an effective phytotherapeutic intervention, to the alterations of the calcium metabolism and to the substances related to it (phosphorus, silicon, fluorine and to the sterol group goes by the name of vitamin D).

Vitamin D deficiency is a widespread condition in the general population in different geographical areas, although this phenomenon is generally underestimated. Numerous experimental and clinical evidences show that vitamin D deficiency represents:

Although vitamin deficiency can be detected in all ages of life, it is the elderly population that is most frequently subjected to it. In fact, most of the vitamin production depends on sun exposure and only minimally on the amount taken with food, so that the categories most at risk of failure are those with limited exposure to sunlight and poor nutritional status. It is therefore clear that the elderly are the most exposed class to the harmful effects of vitamin deficiency, due to lifestyles and consequent lower ability to produce vitamin D.

Vitamin D3: what is it 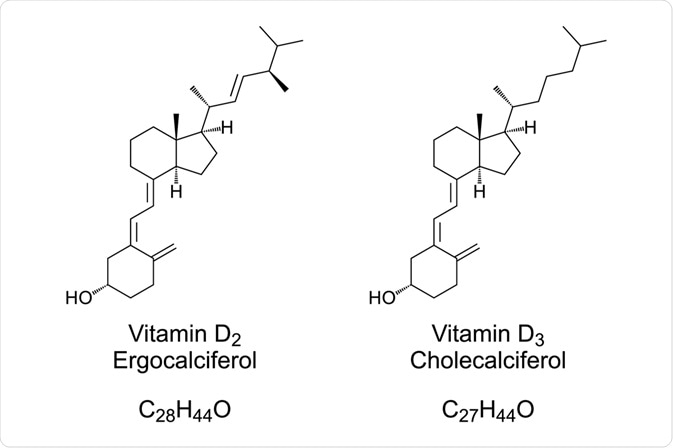 after hydroxylation in the liver into 25-hydroxyvitamin D (25(OH)D) (calcidiol, inactive precursor) and kidney into 1,25-dihydroxyvitamin D (1,25(OH)2D), the active metabolite (calcitriol, the biologically active form of the vitamin) can enter the cell, bind to the vitamin D-receptor and subsequently to a responsive gene such as that of calcium binding protein. After transcription and translation the protein is formed, e.g. osteocalcin or calcium binding protein. The calcium binding protein mediates calcium absorption from the gut. The production of 1,25(OH)2D is stimulated by parathyroid hormone (PTH) and decreased by calcium. Vitamin D3 is absorbed in the intestine with the same modalities as other lipid substances present in food. Unlike other fat-soluble vitamins, vitamin D is not stored in the liver. 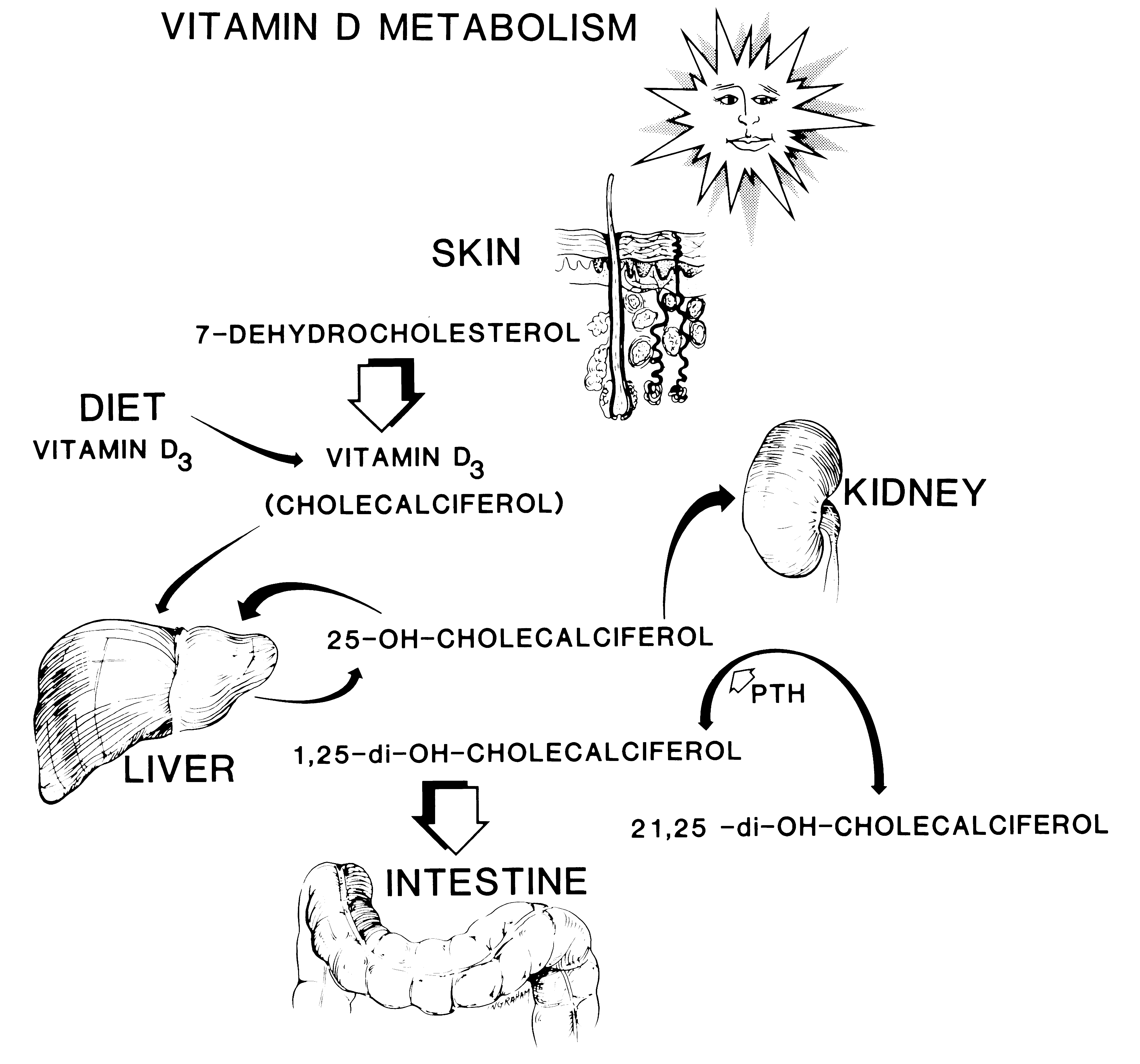 Plasma levels of 25-hydroxycholecalciferol less than 5 ng / l (or 12.5 nmoli / l) determine the appearance of deficiency symptoms. A lack of acquired vitamin D can depend on various factors:

Vitamin D deficiency is associated with:

Furthermore, vitamin deficiency is associated with weakness and muscle pain, impaired physical performance, easy tendency to fall; the correlations existing between vitamin D and muscle activity are based on the evidence that muscles possess receptors for vitamin D.

Risk groups are the elderly.

Vitamin D status is dependent upon sunshine exposure but within Europe, serum 25(OH)D levels are higher in Northern than in Southern European countries. Severe vitamin D deficiency causes rickets or osteomalacia, where the new bone, the osteoid, is not mineralized. Less severe vitamin D deficiency causes an increase of serum PTH leading to bone resorption, osteoporosis and fractures. A negative relationship exists between serum 25(OH)D and serum PTH. The threshold of serum 25(OH)D, where serum PTH starts to rise is about 75nmol/l according to most surveys. Vitamin D supplementation to vitamin D-deficient elderly suppresses serum PTH, increases bone mineral density and may decrease fracture incidence especially in nursing home residents. The effects of 1,25(OH)2D and the vitamin D receptor have been investigated in patients with genetic defects of vitamin D metabolism and in knock-out mouse models. These experiments have demonstrated that for active calcium absorption, longitudinal bone growth and the activity of osteoblasts and osteoclasts both 1,25(OH)2D and the vitamin D receptor are essential. On the other side, bone mineralization can occur by high ambient calcium concentration, so by high doses of oral calcium or calcium infusion. The active metabolite 1,25(OH)2D has its effects through the vitamin D receptor leading to gene expression, e.g. the calcium binding protein or osteocalcin or through a plasma membrane receptor and second messengers such as cyclic AMP. The latter responses are very rapid and include the effects on the pancreas, vascular smooth muscle and monocytes. Muscle cells contain vitamin D receptor and several studies have demonstrated that serum 25(OH)D is related to physical performance. The active metabolite 1,25(OH)2D has an antiproliferative effect and downregulates inflammatory markers. Extrarenal synthesis of 1,25(OH)2D occurs under the influence of cytokines and is important for the paracrine regulation of cell differentiation and function. This may explain that vitamin D deficiency can play a role in the pathogenesis of auto-immune diseases such as multiple sclerosis and diabetes type 1, and cancer.

Osteoporosis is a disease due to excessive demineralization of the bone, which becomes very fragile and prone to fractures.
It is known that from birth onwards the skeleton grows and increases its heritage in terms of mineral density up to a maximum value (defined as “peak bone mass”) around 30-35 years, up to 40 years is maintained a equilibrium condition between bone resorption and neo apposition, then the mineral density of the skeleton starts to decrease slowly.At the time of menopause, in women the loss of bone happens much more quickly, because the ovaries are no longer able to produce estrogen, very important hormones for maintaining the balance of the skeleton.The deficiency of estrogen favors bone resorption at the expense of neoformation, so that bone mineral density undergoes a significant decrease.In man, this process is slower and more linear, but progresses with age, so that both sexes at a later age are at risk of osteoporosis.

Osteomalacia is a skeletal disease characterized by a defective mineralization, with accumulation in the non-mineralized matrix bone (osteoid). The bone thus formed is weaker and softer than normal and undergoes deformations with the load (eg curved legs). The term osteomalacia refers to the disease of the adult, which develops after the end of growth. The most frequent form of osteomalacia is due to a deficiency of vitamin D, which can be determined by reduced production in the body, malabsorption, liver disease, chronic anticonvulsant therapies. Less frequent are the osteomalacie due to altered metabolism of vitamin D, resistance to the action of vitamin D, hypophosphatemia and hypophosphatasia.

The term rickets is used instead for the still growing skeleton, in which the mineralization defect concerns both the bone and the epiphyseal cartilage.

Under normal conditions, exposure to sunlight is sufficient to meet the body’s need for vitamin D. The scientific societies SIOMMMS (Italian Society of Osteoporosis, Metabolism Mineral and Skeletal Diseases), ES (Endocrine Society) and AGS (American Geriatric Society) define optimal serum levels of vitamin D ≥30ng / mL, considering lower values ​​conditions of lack / insufficiency. They also suggest the preventive intake of vitamin D in some sections of the population, the elderly and post-menopausal women, regardless of clinical conditions and knowledge of serum levels. On the contrary, the threshold indicated by the US NAM and the British National Osteoporosis Society (NOS) to define the safe deficiency has been placed below 10ng / mL, while below the 20ng / mL a “risk of inadequacy” is identified.

Vitamin d3 benefits: What you recommend you and why

In conclusion, the active metabolite 1,25(OH)2D has pleiotropic effects through the vitamin D receptor and vitamin D responsive elements of many genes and on the other side rapid non-genomic effects through a membrane receptor and second messengers. Active calcium absorption from the gut depends on adequate formation of 1,25(OH)2D and an intact vitamin D receptor. Bone mineralization mainly depends on ambient calcium concentration. Vitamin D metabolites may play a role in the prevention of auto-immune disease and cancer.

FitoD3, is a supplement with our brand that contributes to the normal maintenance of bones and to the absorption of calcium and phosphorus and to the normal functionality of the immune system. More recommended than cod liver oil if you already have a problem due to vitamin D deficiency. Covers a 2 month treatment.

FitoD3 is in liquid form (in oil) because it is sensitive to water (it oxidizes in contact) and sensitive to heat (if compressed it is heated during processing). FitoD3 is natural, of vegetable origin (not animal!) As it is extracted from Icelandic lichen, therefore also suitable for vegans. It is palatable having a citrus flavor.