Types of skin: seborrheic skin how to treat

by ErboristeriaComo | Jun 16, 2021 | Natural cosmetics for face body and hair

In the last post we have seen how the skin is made, its functions, the various types of skin and in particular the normal, dry and sensitive skin. Now I will talk to you about the seborrheic skin. In the next post instead I will deal specifically with the various types of seborrhea skin (dry skin with blackheads and blackheads, oily fat, mixed skin, acne-prone skin) and treatment tips.

Sebum is a functional lipid substance that is formed by the disintegration of specific cells, the sebocites, just before they are secreted by the sebaceous gland. The sebaceous glands are exocrine glands located in the dermis, connected one by one to a hair follicle and, by means of a duct, they pour the sebum into the follicle canal up to the skin surface through the hair exit hole (follicular ostium ). 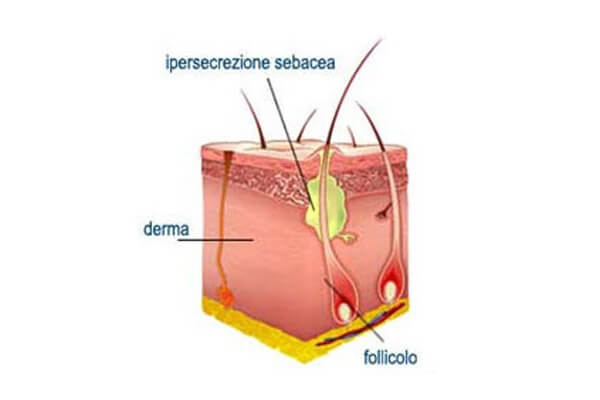 The composition of the sebum varies during the ascent through the follicular duct, it is enriched with fragments of cells, water, water-soluble substances, diglycerides, monoglycerides and fatty acids, the latter deriving from the action of esterases of both cellular and bacterial origin. The sebum formed is combined with the epidermal lipids produced by the destruction of desquamated cornea cells, also containing triglycerides and cholesterol, to form the superficial lipid film that covers the stratum corneum: it therefore contains a significant amount of free fatty acids that contribute to the acidity of the pH of the skin surface also conducting bacteriostatic and fungistatic activity.

Seborrhea and acne are skin changes often associated with each other that have in common the involvement of the sebaceous gland.

When the quantity of sebum increases abnormally (for example due to genetic, endocrine, environmental factors), a condition known as seborrhea (also called hyperseborrea or sebum hypersecretion) occurs.

Seborrhea and acne: the differences

What are the causes of seborrhea?

The causes of seborrhea have not yet been clearly clarified. Among the factors that favor the appearance of seborrhea we remember:

When there is a problem of hyperseborrea, a different composition of the sebum promotes the proliferation of microorganisms, the sebum loses the self-sterilizing property and becomes hydrophobic, instead of hydrophilic, as it normally is. These factors, together with the stagnation of sebum, contribute to the formation of inflammatory processes in the follicles, which can give rise to “pimples” (to be combated with Serum anti imperfections!).

The most important microorganisms involved in the process of altering the sebum are Staphylococcus epidermidis, Pithyrosporum ovale and Propionilbacterium acnes. The latter is definitely the one most involved in the process of cleavage of triglycerides, this thanks to the fact of being anaerobic and to position itself at the exit of the glandular duct inside the follicle

Seborrhea gives the skin a shiny and oily appearance, sometimes affecting the scalp and upper part of the back, or a dry and rough to the touch. In this case we speak of asphyxiated skin, a problem that arises when the excess of sebum does not find an outlet outside the follicles and, stagnating inside them, leads to the formation of comedones.
The seborrhea also precedes and often accompanies acne lesions (but, attention, acne is the direct consequence of seborrhea!): closed comedones (white spots), open comedones (blackheads), papules, pustules, nodules and cysts.

On the scalp, on the other hand, seborrhea can be accompanied by dandruff, alopecia and oily hair.

The exalted activity of the sebaceous glands is a fundamental prerequisite for the problem of seborrheic skin. Based on the extent of the phenomenon, it is possible to distinguish several types of seborrheic skin:

How can the seborrheic skin be treated?

Domus Olea, specialized in eco-cosmetics cosmeceutics in collaboration with the University of Florence, proposes the Sebo Lift line for seborrheic skin, which has been developed to achieve these objectives:

The main active ingredients of the Sebo Lift line (from plant species grown locally with organic farming) and their function:

Also snail slime and portulaca oleracea are excellent ingredients for oily and combination skin: if you want look at  our posts and the cosmestics products Lumea and Erboristeria Como on our erboristeriacomo.it.

For a focus on oily skin and combination skin, read also this post.