The essential fatty acid potentials, the omega 3 properties and benefits to know and the best omega 3 to choose for the health of your skin, heart and brain.

The human diet in the last 100 years has changed considerably. One of the most important changes is the huge increase in dietary fat. From a qualitative point of view, the following occurred:

This diet, associated with other environmental changes, is considered one of the major causes of the rapid increase in diet-related chronic diseases, including cardiovascular ones, in the last century, which is why it needs to be supplemented with the best omega 3s.

LA and ALA fatty acids are essential fatty acids for our diet. Human species is unable to synthesize them and it is therefore essential to take them adequately and constantly from food. These two acids do not perform a precise physiological function, but they are an energy source.

Once they enter the cell compartment, essential fatty acids are transformed into LC-PUFA at the microsomal level and incorporated into the phospholipidic structures of cell membranes to ensure, in particular EPA and DHA, the right degree of fluidity, permeability and modulation. Also freed from membrane phospholipids they are precursors of molecules defined as eicosanoids (prostaglandins, prostacyclines, thromboxanes, leukotrienes and lipoxins) and, recently, docosanoids. These molecules act as hormone-like substances also playing an important role in inflammation, blood pressure, bronchial reactivity and platelet aggregation.

In recent decades, based on epidemiological observations of the low incidence of autoimmune and inflammatory diseases in the Eskimo population, the interest has shifted towards LC-PUFA fatty acids and in particular on DHA for possible biological effects. In particular, it has been found that fish oil obtained from sardines, mackerel and herring, is rich in Omega 3, in particular EPA and DHA.

Omega 3 what they are and their origins

Omega 3 are long-chain polyunsaturated fatty acids from carbon derived from alpha-linolenic acid (ALA). They are essentially contained in fish, especially the blue one (especially in sardines, herring ..), but also in walnuts and oil of linen. The ALA precursor, thanks to the action of the enzymes of our organism delta-6-desaturatase, elongase, and delta-5-desaturatase, is activated in the form EPA (eicosapentaenoic acid). These same enzymes transform omega 6 (linoleic acid, LA) into arachidonic acid (AA). Elongase and delta-4-desaturatase then transform EPA into DHA, and arachidonic acid into DPA. 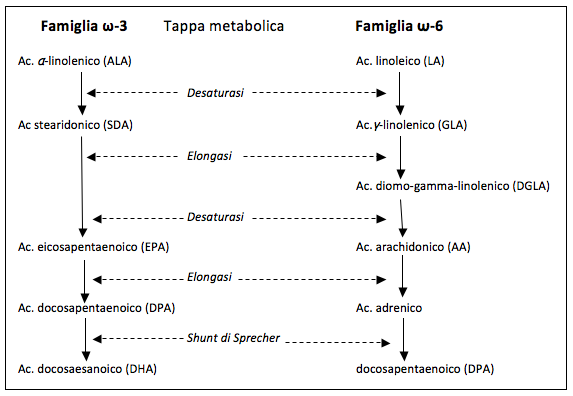 While in humans the synthesis of arachidonic acid from linoleic acid is still very efficient, the conversion of alpha-linoleic acid (ALA) into LC-PUFA n-3 (Long-chain polyunsaturated fatty acids) is an ineffective process (Burdge and Calder, 2005), also because the synthesis of DHA requires stages of additional transformations. Therefore endogenous biosynthesis is not sufficient and LC-PUFA n-3, in particular DHA, must be taken preformed.

The best omega 3s: how to take them

The best omega 3s, Omega 3 Active plus, that our online herbalist has selected for you according to the above criteria, are assumed as follows: